The oldest, nearly complete hand-knotted rug dates from the 4th or 5th century B.C. and is known as the Pazyryk rug. The rug was discovered in 1949 by Soviet archaeologists inside the burial tomb of nomadic tribal chief near Pazyryk in southern Siberia. The rug was protected from disintegration in the permafrost. The rugs design and construction is relatively sophisticated indicating that rug weaving had been developing for hundreds or even thousands of years. This rug measures 72 inches x 78 inches (180 cm x 195cm) with a wool pile/foundation and has 225 symmetrical knots per square inch. The Pazyryk rug is currently housed at the Hermitage Museum in St.Petersburg, Russia. 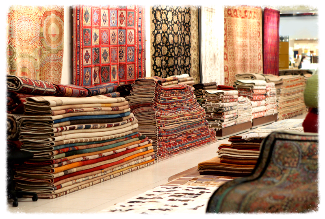 Today hand-made rugs are produced from North Africa and Europe to China with many different styles and weaving techniques. Rugs can be hand-knotted, tufted, flat-woven, or machine-made. major rug producing countries include the United States, Afghanistan, the Caucasus region, Central Asia, China, Egypt, India, Iran, Morocco, Nepal, Pakistan, Romania, Spain and Turkey. Today, the majority of rugs imported into the United States are from India and China. The United States produces machine-made rugs, which are mainly woven or tufted. According to "Floor Covering Weekly" in 2005, 18.1% of soft floor coverings purchased were area rugs. This percentage represents sales of 2.72 billion and figure may be on the conservative side. Rugs have been much more popular in Europe than in the U.S. for many years.